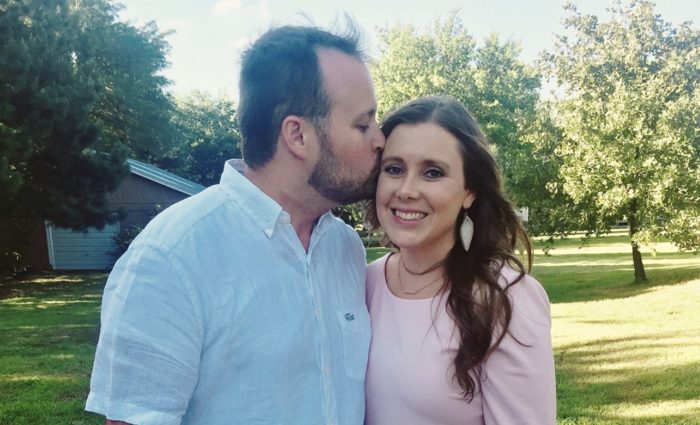 Anna Renee Duggar is the wife of convicted Josh Duggar, the infamous convicted sex offender who became famous as a reality TV star. Apart from being recognized as Joe’s wife, Anna also gained fame for her family and also for being a TV personality on her own.

She has attracted a lot of attention of late for sticking by her husband even after he was found guilty of numerous sex offenses. Here is all that is worth knowing about her.

Although she is now famous as Anna Renee Duggwe, it was as Anna Keller that she was born on June 23m 1988 which means she is now years old. She was birthed as the fifth of the 8 children of her parents; Michael Keller and Suzette Keller. Anna was brought up in a large family in South Florida, the United States, which was also her place of birth.

While she was growing up in a Christian family, her father reportedly left his job to start ministering to prison inmates and Anna sometimes went along with him.

As regards her education, she was home-schooled together with all her siblings and after she was done with high school, she obtained a degree in Early Child Education from an online Christian college.

She Got Married To Joshua James Duggar In 2008

Because of the strict religious home from which she came, Anna did not get to have any relationship prior to meeting Joshua Duggar in 2006 at a homeschooling convention. They both fell for each other but did not start dating until after she informed her mother.

Anna and Josh were not allowed to have any physical contact until after engagement and they were also forbidden from spending time alone until after they got married.

When she was 20 and Josh was also the same age, the pair got engaged and then they got married on September 26, 2008. The wedding was held at Buford Grove Baptist Church in Hillard, Florida.

During their wedding ceremony, both Josh and Anna made a vow that the number of kids they were going to have was up to God.

It is, therefore, not surprising that after 14 years of marriage, they now have 6 children. The first child of the couple, Mackynzie Renee is now years old. She was born on June 15, 2009, and weighed 8 pounds and 9 and a half inches long.

Her Husband Has Been Convicted Of Various Offenses

The family life of Anna Renee Duggar and Joshua Duggar came after serious scrutiny after allegations began to mount against Josh dating back to the early 2000s when he was around 14 and 15, of molesting underage girls. He was accused of touching the breasts and genitals of his sisters back in 2002 when they were sleeping. He allegedly later confessed to his parents who disciplined him at home.

However, more claims emerged against him of touching a babysitter and his much younger sister. The matter was brought to the church elders and then the police were notified by the church elders.

While most of the cases of molestation came against him when he was between 14 and 15, he would later admit to watching pron and being unfaithful to his wife. More so, he was linked to two Ashley Madison subscriptions which were canceled in May 2015 after first subscribing in February 2013.

More damning allegations came against him in August 2015 when he was accused by adult actress Danica Dillion of assaulting her physically and emotionally. This came during a consensual act in a club in Philadelphia earlier in the year. However, it emerged that Duggae was not in Philadelphia at the time of the claim.

Josh Duggar got arrested in 2021 and was tried for receiving and possessing child pornography. He was found guilty of the offense in December 2021 and was sentenced to 12 years and 7 months behind bars, followed by 20 years of supervised release among other things.

Has Anna Duggar Divorced Her Husband?

Following the conviction of Josh Duggar, many people including her cousin, Amy Duggar King, encouraged her to divorce Josh because she did not choose any of it.

However, Anna is still sticking by her husband. She had an Instagram post, with the simple message, “there is more to the story”. This is coming even after her brother, Daniel Keller pleaded with her to leave her cheating husband.

1. Both Anna and Josh are from very large families

While Anna was born as one of the children in a family of 8, her husband has 18 siblings in all. It is not surprising that they have 7 kids together.

2. Her parents are said to have persuaded her to stay with Josh

Anna’s parents, Mike and Suzette are said to be strongly on the side of their daughter not divorcing Josh. According to reports, they encouraged her to stay with him until he concluded his rehab because they are against separation.

3. What is Anna Renee Duggar’s net worth?

With a husband behind bars and seven kids to cater for, Anna Duggar’s net worth is put at $60,000. The stay-at-home mom made her meager fortune from her appearance on the 19 Kids and Counting TV show.