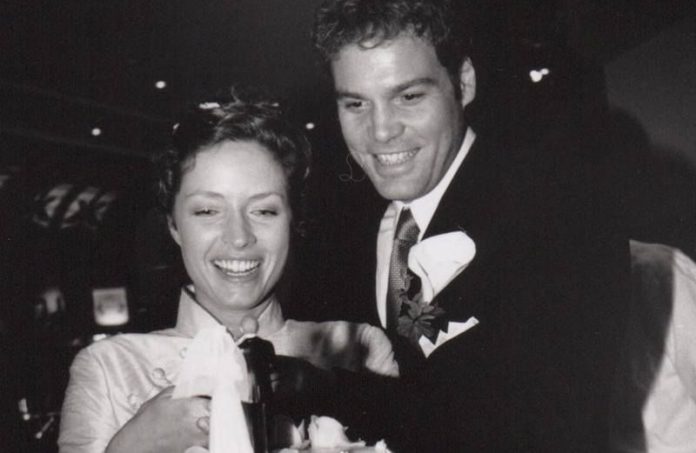 Carin Van Der Donk is a former model and photographer who although has worked with some big brands in the past, her real claim to fame in Hollywood was thanks to her marriage to American actor, director, and producer, Vincent D’Onofrio. The two first got married in 1997, but along the way, they decided to go their separate ways before coming back again in 2008. Since then, they have remained together.

While she is constantly made reference to in relation to her husband and her marriage, there are many other interesting things to know about the former model.

1. She is from the Netherlands

Although it is in the United States that she became even more famous, Carin van der Donk was born in the Netherlands on November 30, 1969. It was also in her home country that she was brought up alongside her sister,

2. Carin rose to fame as a model

Blessed with beauty and charisma, she started modeling when she was still a teenager and by the time she was 15, she was already famed internationally as a model. This gave her the chance to work with some big photographers including Jean-Loup Sieff.

More than just a model, Carin is also a photographer. She started her career behind the camera after she moved to the United States and settled in New York. First, she worked as an assistant producer for Art + Commerce where she worked with different famous photographers. Her photos have not only been used for political movements, but she has also contributed to various HBO documentaries including The Sentence (2018), and Kill Chain (2020).

The photographer is currently a student of the International Center of Photography where she is pursuing a program in Documentary Practice and Visual Journalism.

It was in 1996 that the paths of the two first crossed and they fell in love almost instantly. After dating for a while, they got married on March 22, 1997.

The union between the pair came to a sad end in the early 2000s. The reason for the separation was not known.

After the divorce, the actor made it clear in 2005 that he was a single guy. He stated that befpre the divorce, he was mostly into his work and family but since he was divorced, all his effort was put back in his work.

5. How they returned to each other

After being divorced for more than three years, the pair returned to each other in 2007 and this time around, their bond became even stronger. In 2016, the actor celebrated his wife as the best wife and mother in the world.

6. Their divorce and return has not been without its controversies

The controversey that followed their divorce and subsequent return arose after people still described them as divoced or single. This frustrated Carin so much that she made a statement setting the record straight that she was married. Vincent was also forced to take the same shot, telling the media to get their facts straight.

7. Carin Van Der Donk is a mother of two

From her marriage to the famous actor, Carin has been blessed with two kids; Elias Gene D’Onofrio and Luka D’Onofrio. While Elias was born in December 1999 before his parents divorced, Luka was born in 2008 after they returned to each other.

Elias D’Onofrio has taken aftr his father as he is an actor. He has appeared in some productions including After School (2014), Off the Rails (2015) and Him (2017). The career path of Luka who is still a young teenager is still not clear.

8. Her husband has been in some famous relationships in the past

Carin van der Donk has not had a very much known history with other men in the past, but that is not the same with her husband. Before the Dutch model, Vincent got involved in some high profile relationships in the past. He dated Greta Scacchi from 1989 to 1993 and then in 1995, he dated Cameron Diaz, but the relationship also ended in that same year.

10. Her net worth is not known

While the exact net worth of the former model remains unknown, it is no secrt that on his pat, Vincent D’Onofrio has a net worth that is estimated at $14 Million. He made his fortun from his long lastig career in Hollywood.