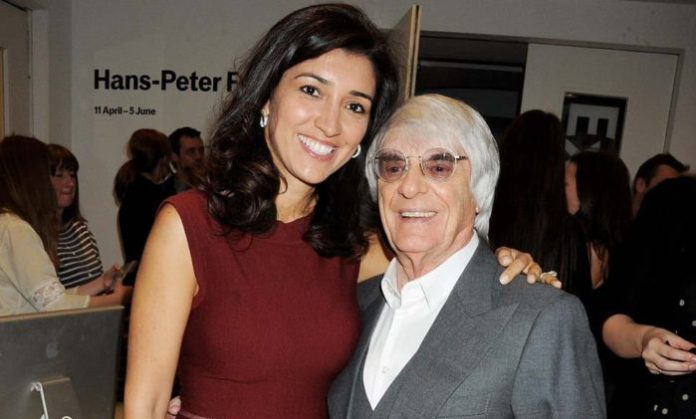 In 2012, Fabiana Flosi became the wife of British Business magnate, Bernie Ecclestone. The marriage drew the attention of many because of the incredible age difference of more than 40 years between them. More interesting was the fact that at age 89, he welcomed a baby with Fabiana.

Even though Flosi now takes the center stage in the heart of the businessman, she is not the first woman he dated, neither was she the first that he would date.

Not so much about the personal life of Fabiana Flosi is known to the public, neither is her career life known. However, what is known is that she met Bernie Ecclestone in 2009 which also happened to be the same year that his second marriage came to an end.

A Brazilian, she met him at the World Motor Sports Council and in spite of their age difference, they fell in love and then three years later they got married in an intimate event in 2012.

Bernie had always hoped that he would have a son. This wish came true in July 2020 when Fabiana gave birth to their son who was named Ace. Interestingly, Bernie was 90 years old at the time while his wife was 44 years.

Slavica Ecclestone Was The First Woman He Married

Before Fabiana Flosi ever made it to the picture, there was Slavica, a woman he was previously married to. It was in May 1958 that Slavica was born in Rijeka. She was brought up in poverty and her father abandoned the family when she was still a child. She had a difficult childhood she was once caught and imprisoned for stealing.

The first meeting between the Formula 1 boss and Slavica was not a pleasant one. She was a tall 23-year-old Croatian beauty who was modeling at the time while he was 51 years old.

She was standing in the pits at Italy’s Monza race circuit together with Nelson Piquet. Bernie ordered her to get away from the pits but she insisted that she was going nowhere. She even threatened to kick him as she didn’t know who he was.

Even with the massive age difference between them, he fell for her because of her fiery nature and the power she seemed to possess. Even though he was in a long-term relationship at the time, he ended it after the model told him she was pregnant with his child. She threatened him that they either lived together or she would leave for Croatia with his baby which she gave birth to named Tamara Ecclestone, and he would never see them again.

They got married in 1985 and by 1988, they had another daughter named Petra Ecclestone, who is now a model. Although it was a troubled union, it lasted for 24 years before it came to an end in 2009 after Slavia filed for divorce in 2008. She received $1.2 billion as a divorce settlement.

Ivy Bambford Was His First Wife

Even though the name of Ivy Bambford is not so much mentioned like his 2 other wives, she was the first woman that Bernie Ecclestone got married to. They were said to have got married in 1952. At the time, Ivy was only 21 years old while Bernie was. The marriage produced a daughter Deborah Eccleston who was born in 1955. Unlike her two other sisters, Deborah who grew up with her mother maintained a very private lifestyle.

The marriage between Bernie and Ivy lasted until the 1960s when it came to an end in divorce. Their daughter has since married and she has children and grandchildren which means Bernie is now a great-grandfather.

There Were Other Women In His Life

Before his first marriage, the former F1 president dated a Singaporean Chinese named Dora Tuana Tan. Some sources claimed that the two were married for a while, but this is not very clear. However, we know that they spent many years together and Bernie loved her. They parted ways shortly after the birth of his first daughter Tamara in 1984.

According to reports, he did not want to break up with Tuana but had no other option because Slavica had threatened that unless they lived together in London, she was going to take their daughter away and move to her home country.

Sources revealed that he was with Tuana for 17 years before they went their separate ways without a child between them.