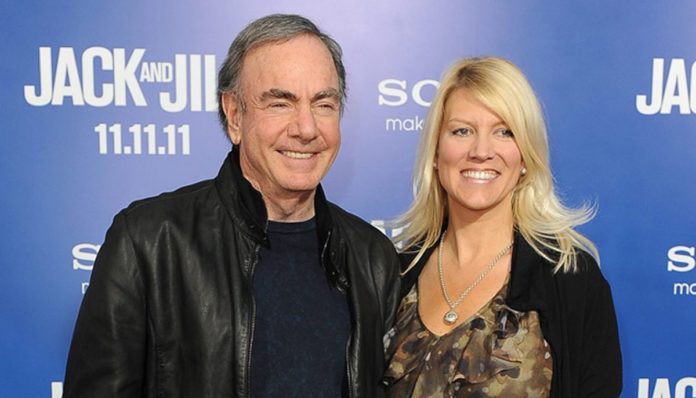 Katie McNeil is an actress, celebrity manager, and music producer who has now become famous as the third wife of American singer, Neil Diamond. The two started dating after Neil went through two failed marriages and some relationships that did not end in marriage.

Even though she is married to someone very famous, Katie has still managed to maintain a very private life, which has got many people wanting to know more about her and her relationship with the beloved singer who has declared that she will be the last woman he will be married to.

Katie fell in love with music since she was a little girl but since she didn’t build a  career around it, she decided on becoming a music manager, something she started in the mid to late 1990s.

She Met Neil Diamond While Working With Him

The first time that the paths of Neil Diamond and Katie McNeil crossed was when they were working on his 2009 Neil Diamond: Hot August Night/NYC documentary in 2007. Katie was working with him as a video producer.

They did not start dating immediately as she went on to become his manager. At first, they maintained their business relationship before love happened. She did not want to get involved with him because she wanted to keep it at the professional level. However, they soon started dating.

Neil could not keep it under wraps for long as he soon took to his social media to announce his new lover to his followers. He stated that he was lovestruck.

They Got Married In 2012, Making Her His Third Wife

Even though there was close to 30 years age difference between them, that did not stop Katie McNeil and Neil Diamond from getting married in 2012. Before they got married, Diamond announced their engagement on Twitter in September 2011.

The wedding ceremony held on April 21 at the Beverly Hills Hotel. While Diamond was 71 at the time, McNeil was 42 years old. It was attended by friends and family members totalling up to 225 guests.

After the ceremony, the couple decided that instead of using their lemo, to take a cab to drive home instead of their cozy hotel accommodation.

Katie McNeil and Neil Diamond Have No Kids Together

Even though they have been together as man and wife for close to a decade already, they do not have any kids together as a couple. However, on his part, Neil is a father of four kids he had with his former wives.

The First Two Women He Was Married To

while this is the first marriage for Katie, it is the third for Neil Diamond who was previously married twice.

His first marriage was to a woman he was said to have met while in high school, Jayne Posner. The marriage only lasted for six years from 1963 to 1969 before it came to an end in divorce.

His second marriage was to Marcia Murphey, a woman he married in the same year he divorced his first wife, 1969. This union lasted until 1995 when it ended in divorce after it was alleged that Neil Diamond cheated on his wife with a cowgirl, Jonnie Jonckowski.

According to Jonnie, she had no regrets getting involved with the musician as she believed they were very much in love. She claimed they started their affair because they were both aways on the road and they were lonely and needed company. More so, she stated that they were more of kindred spirits and that she felt his marriage was already over by the time they met.

Following their divorce, Neil settle Marcia with an alleged $150 million described as one of the most expensive divorces ever, but he stated there was no truth to the report.