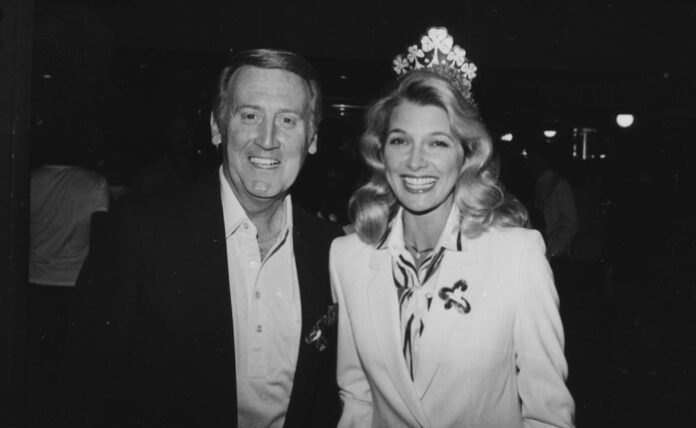 Vin Scully’s wives were Sandra Hunt and Joan Crawford. An iconic figure in game-calling in the MLB, he rose to fame as a sportscaster who called games for Major League Baseball’s Los Angeles Dodgers for close to 70 years before his retirement in 2016.

Before his sad demise at the age of 94 on August 2, 2022, Scully was married twice and lost both women to the cold hands of death.

Scully fathered four children from his marriages; Michael Allen Scully, Kevin Scully, Erin Scully, and Catherine Scully. Here is all to know about his wives, kids, and other family members.

Who Are Vin Scully’s Wives?

As indicated, Scully was first married to Joan Crawford and after the marriage ended tragically in her death, he went on to marry Sandra Hunt.

Joan and Vin got married on February 15, 1958. At the time, Crawford was almost 21 while Vin was almost 31. It is not clear how the two first met and started dating.

The pair remained together for the next 15 years before Joan died on January 26, 1972, after 15 years of marriage. The cause of her death was said to be an accidental medical overdose. Joan was 35 years old when she died.

Sandra Hunt Better known for being Vin Scully’s wife, Hunt was the second and last woman to get married to the legendary sportscaster. She was born on December 27, 1944, in Cascade Virginia.

Following the demise of Scully’s first wife, he got married to Sandra in November 1973. She was almost 30 years old at the time while Vin was.

The couple remained married for 47 years before Sandra’s sad death in January 2021. Sandra lost her life to the progressive nervous system disorder, ALS, which is also known as Lou Gehrig’s disease. She was 76 years old when she died.

Although Sandra’s marriage to Vin only produced a daughter named Catherine Scully, she had two children of her own from a previous marriage.

In his 94 years on earth and two marriages, Vin Scully had a total of four children; Michael Allen Scully, Kevin Scully, Erin Scully, and Catherine Scully.

Better known as Mike Scully, Michael was born on 1 Feb 1960 in Santa Monica, Los Angeles County, California, USA. An engineer by profession, he worked with a subsidiary of Arco as a supervising engineer.

Sadly, he lost his life on 20 January 1994 after he was involved in a helicopter crash. He was 33 years old when he died.

Better known as Cat Scully, she is the last child of the family and was birthed to Vin from his second marriage to Sandra Hunt. Catherine was born on January 21, 1975, in California.

She currently lives in Calabasas, California where she works as a director for the Compass, a company that is into luxury estates as well as sports and entertainment.

She is since married to a man known as Rob Blank and they have five children; Mackenzie Jean, Chloe Rose,  Annie Lynn,  Kate Kristian, and Grace Luderer.

For the other children of Vin Scully, Kevin and Erin, there is very little information about them in the public domain.

Also known as Cat Scully, Catherine Scully is an American realtor who is better...
Relationships

John Hughes Yogi was a legendary football player who played for Scotland and Celtic...
Family Members